Navigate back to the homepage
О проекте

The “objective” language of journalism creates a dampened and blurred version of the events in Belarus. Reading about “injured in clashes with police” creates an image of smashed windows, overturned and burning cars – the whole nine yards. And that takes us back to normalcy. People get injured in clashes, that’s normal. Things like that can happen anywhere in the world. The details slip your mind, because the mind has already put this on a familiar shelf.

Then public perception gets distorted even further by calls to “stop the violence on both sides.” As if we were talking about a standoff between equal forces, not some rare and desperate attempts of unarmed to protect themselves from an unrestrained extreme violence.

We can afford to call things by their true names. What’s been going on in Belarus on August 9-13 was a planned and organized retribution against Belarusian people. The goal was intimidation to further a political agenda, and that makes it a terrorist operation.

I witnessed the occupation of Donbas region in early Spring 2014 firsthand. The events in Belarus make me have flashbacks. Until now, that was the only time I saw armed men without insignia stop cars in the streets, break their windows, drag drivers and passengers out, put them face down on the tarmac, and beat them. Or start a “safari” hunting people carrying national symbols. People weren’t “detained,” they were kidnapped all over town: from shops and cafeteria, public transportation, courtyards, apartment blocks. Women, teenagers, anyone. There were even cases of little children being hurt.

I thought the kinds of torture that were used against the detained in Belarus could only happen in Donetsk and Luhansk basements. Snatched people were laid down in layers, were walked over, jumped on, forced to lie or stand in an uncomfortable position for hours, to pee themselves. They were beaten to cripple and maim: hit in the knees, tailbone, elbows, neck, head, backbone, genitalia. People were beaten until they lost consciousness. They were packed into small cells without enough room to lie down or sit, without enough air to even breathe. Sometimes they teargassed the cells. They were stripped naked, or their clothes were torn apart leaving their genitalia and buttocks exposed. Some were publicly raped. Some had their hair cut off with skin. Their face or their clothes were labeled with markers to sort them for further torture.

There’s been hundreds of people who were brave enough to register and report the torture and humiliation. We can only guess how many more people are too traumatized or too afraid to talk.

A doctor woman was shot in the guts on her own balcony for asking to stop beating a girl. In another case the police attacked a car with a young couple, they hit it on the hood and the windows with truncheons and then rammed it with an armored car, leaving the five year old girl that was in the car injured and bleeding. A 43 years old trucker, a father of five, was shot in the head and killed.

What kind of “normalcy” is this?

Exact number of detained is still unknown. Estimates vary from 7,000 to 10,000. We know firsthand that they’ve built an actual concentration camp – with barbed wire and watchtowers – to hold the “detainees” near Slutsk. Detainees that weren’t even registered in any way.

This can’t be described in terms of justice and lawful order, because it has no connection whatsoever to those things. It is best defined as a crime against humanity.

The leaders of the West are now expressing concern. “Oh noes, we don’t want the Ukraine scenario to repeat in Belarus!” And started talks with Putin: the author and the implementer of that very scenario.

Can somebody please tell them that this exact scenario is already being implemented in Belarus with active support from Russian propagandists? They say we now have our own “Maidan:” a basket of Nazis, drug addicts, and felons; all marionettes of Western puppeteers, sold out for State Department cookies. They are looking to rip Belarus away from the fraternal Russia, and then to go harvest strawberries in Poland. And we now have our own “Anti-maidan:” poor but honest laborers who want peace, stability, and closer ties with the fraternal Russia. They carry Russian flags and St. George ribbons (black-and-brown symbol of Russian military power). All of a sudden Belarus – until very recently a remarkably uniform country – looks torn apart. They’re waving Polish flags in Hrodna! The West is rattling tank tracks on the border, their “black-skinned and yellow-mouthed” (Lukashenka’s words) soldiers can’t wait to invade and occupy the Hrodna region. And that threatens more than Belarus, it threatens Russia, so Putin has to bring the troops in.

I want to say, “pinch me, this must be a bad dream.” But it’s not. It’s the very real sight of 66 years old madman who lost the election by a landslide to a former housewife plunging our country into war and endangering our sovereignty.

Make no mistake: just like there were no “riots” or anything you could really call “clashes,” there is no “Maidan” nor “Anti-maidan,” there is no “civil division.” All these terms came from an alien and externally forced coordinates system that is used to lure Belarusians into a trap.

Absolute majority of Belarusians voted against Lukashenka. He lost in every corner of the country. He lost because everybody’s sick of him, sick to our stomachs. Sick in our guts. Sick to the very bottom of our famous Belarusian tolerance. He lost to a former housewife: a woman who was able to unite everyone because her campaign didn’t rely on the identity politics that were the basis of previous opposition campaigns and scared aware most Belarusians. Her campaign had humanitarian appeal: a young and beautiful woman challenging a rude and aging yokel.

Geopolitics wasn’t involved. The government propaganda tried to inject it anyway, presenting Tsikhanouskaya as – wait for it – a Kremlin puppet. And painting Lukashenka as the defender of country’s sovereignty from the imperial ambitions of his sworn ally. Just yesterday, Lukashenka pretended to be the choice of Belarusian radical nationalists.

Lukashenka fell victim to not having functioning feedback from the public. He is hopelessly lost in 1990-s, in the times when democratic institutions still worked and when his strongest opponents in the parliament were the nationalists. He has failed to notice that he has eradicated them almost completely. His russification policy has eliminated their base of people who vote based on national identity. And even though he destroyed the Belarusian language and has cornered the ethnocultural nationalism into a ghetto, he has failed to erase the national identity or to replace it with some new construct built from tried manure and sticks. Worse, he himself has reawakened it when he decided to use it as leverage against Putin.

Russian media said “Lukashenka is flirting with the nationalists.” It would be more accurate to say he was flirting with the national identity. It was legalized and even somewhat encouraged. Even in homeopathic dosage, it had huge effect. For a long time, Belarusians cast no shadows and left no reflections in mirrors, the people became completely invisible. It was depressing to live this way, without any sense of nationality. So when offered an opportunity to have an attractive national identity, Belarusians jumped to that with the kind of passion only available to people who waited for too long. Just look at them, look at how proud they are of each other! Despite the blood, the sweat, and the tears, what they feel right now is not unlike a collective orgasm.

This isn’t nationalism in the strict sense of the word. Not a set of political beliefs. No heavyweight reasoning of who we are, where we’re from, where we’re going, what we should become. What Belarusians feel is the joy of unity, the happiness of a common cause, the extasyy of shared struggle.

Lukashenka is trying to frame the sense of national unity that he himself has stirred awake as nationalism, to better sell it to Russia as a threat. He’s desperate and haphazard attempts to form a parallel Belarusian nation – from indentured state employees, “siloviki” (men with guns), felons, and marginals. It looks sad and unconvincing. Still, that’s how it looked in Ukraine, and yet it worked.

Don’t forget, Lukashenka continues to hint at talks of Russian military intervention with Putin, using the pretext of protecting the “deeper nation” from the Western aggression. We already saw that he’s capable of any insanity in defense of his power. What else is he going to do: false flag terror attacks, military provocations on the border, imitating a civil war? You can’t rule any of it out.

The Ukraine scenario is a made up scheme. The person implementing it is an usurper who’s using terror to hold on to power, with encouragement and engagement by Russian government. Don’t pretend that you don’t see that. Don’t try to decide our fate in a phone conversation with Putin. Stop pretending that Belarusians don’t exist as a self-determining constituency. There’s not a lot of us, but we do exist. We like what we’ve become. We are incredible. We like having free choice. We like fighting for it. You will have to deal with us, a newborn European nation. If you do, we will become good friends.

If you really are “deeply concerned” that Belarus can see a repeat of the “Ukraine scenario,” don’t pamper Putin. Slap his greedy hands. Don’t try to scare his new vassal – who has decided to become another Zakharchenko and Plotnitsky – with a travel ban. Give him an ultimatum: either he leaves or he’s toast. You are large and strong and the bastion of civilization. Time to remember that.

Dictatorship, now truly vicious and bloody, is not our cultural identity. It is our national tragedy. We found it in ourselves to say “no” to it. For that, we are being exterminated. Don’t let them do it. 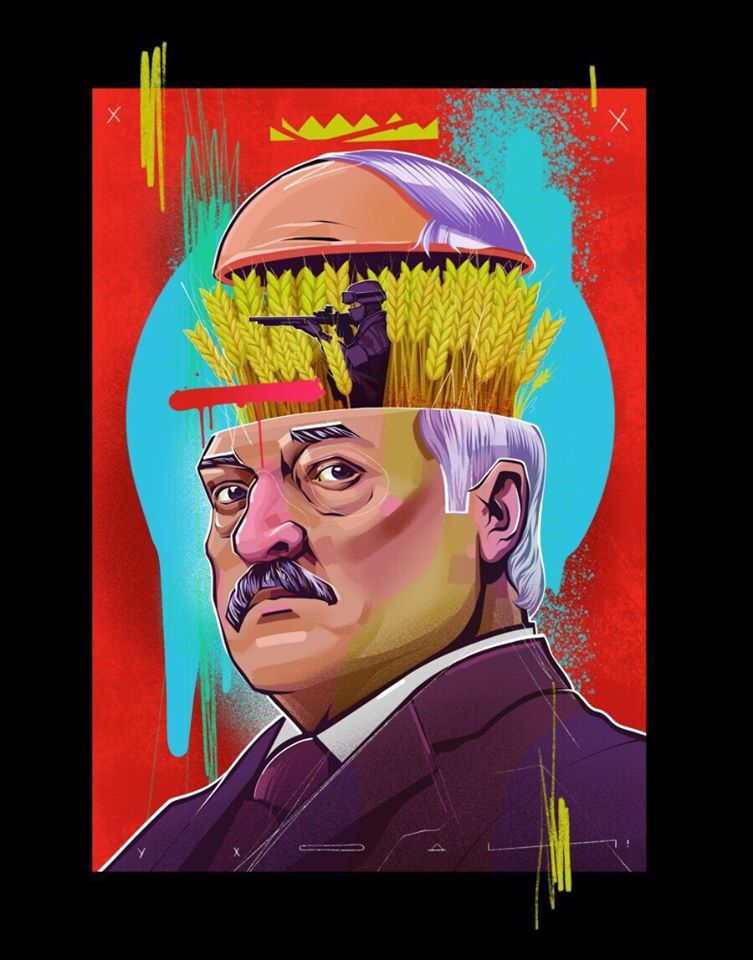